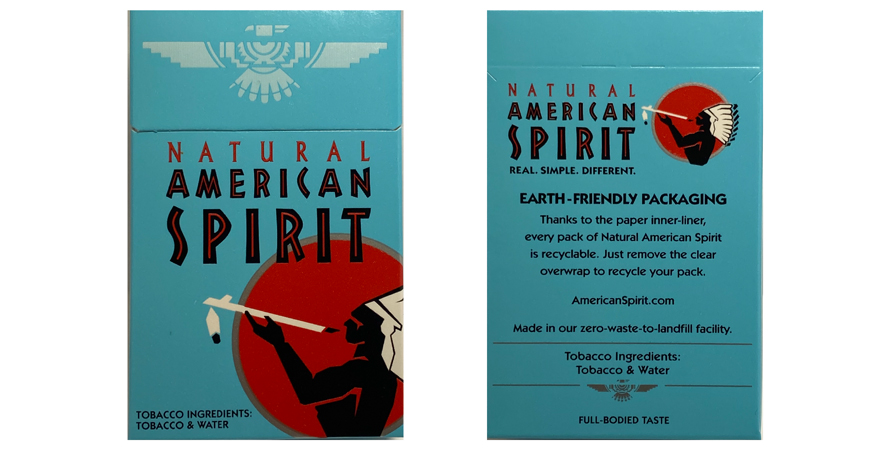 Most people are familiar with the adage "a picture is worth a thousand words." However, the message conveyed by an image may not always be factual.

Authors of a study recently published in the BMJ journal Tobacco Control said that was the case with Natural American Spirit (NAS) brand cigarettes. Notably, more than half of the American Indian/Alaska Native (also referred to as Native American) respondents shown those cigarette packs and surveyed about their beliefs perceived NAS as safer than other cigarette brands and owned and grown by American Indian tribes. The packs feature an American Indian warrior, thunderbird and peace pipe.

UC Merced health psychology Professor Anna Epperson, in her work with Stanford University Professor Judith Prochaska on tobacco cessation interventions in Northern Alaska, stated that in the field, participants reported "switching" to NAS, calling it the "healthy and natural" brand, rather than quitting smoking. In reality, NAS cigarettes are just as harmful as other cigarette brands.

In earlier work, Epperson and Prochaska examined health risk perceptions of NAS among adolescents and adults, and documented beliefs that NAS cigarettes were "safer" and better for the environment. An overwhelming number of participants in these studies reported beliefs that NAS was owned by American Indian tribes and that the tobacco was grown on Native lands, neither of which is true. NAS is owned by Reynolds American, as part of a division of British American Tobacco, arguably the largest publicly traded commercial tobacco company in the world, and manufactured in Oxford, N.C.

According to the Centers for Disease Control and Prevention, American Indians/Alaska Natives have a higher risk of experiencing tobacco-related disease and death due to a higher prevalence of cigarette smoking compared to all other racial/ethnic groups in the U.S. Yet, American Indian/Alaska Native people are understudied in tobacco research, Epperson said.

Epperson and Prochaska's study titled "Native Owned and Grown or Demeaning and Offensive? American Indian Adults' Perspectives on Natural American Spirit Branded Cigarettes" focused on perceptions of NAS among American Indian adults. They found that 65% of participants believed NAS was owned by American Indians and/or grown on tribal lands. Among current smokers in the study, beliefs of an American Indian/Alaska Native affiliation were associated with misperceptions of NAS being a healthier cigarette and with a greater intention to purchase the brand.

"There is this idea that if it's grown or owned by tribes, then it must mean it's safer," said Epperson. "There is a common American Indian theme linking the land and the people. American Indians are viewed as in touch with nature, engaging in natural practices. Associating a tobacco brand with American Indians promotes the idea that the brand must be organic and grown responsibly."

The study also found a small but vocal minority of participants (17%) had strong words for the company. This set of respondents knew the tobacco product was not American Indian affiliated and described the packaging as cultural misappropriation, using terms such as "demeaning" and "offensive." Moreover, they were also less likely to believe the cigarettes were safer to smoke.

"With public health implications, removing the American Indian imagery may dissuade people from switching to NAS cigarettes instead of quitting smoking," said Prochaska.

Of note, NAS misappropriation of American Indian imagery continues despite changes nationally. For example, in professional sports, the Washington Redskins are now called the Commanders, and the Cleveland baseball team once known as the Indians is now the Guardians. The dairy products brand Land O'Lakes also has stopped using the image of an American Indian woman.

"Natural American Spirit could drop the warrior and still be easily recognizable with its bright colors and branded name," she stated. "The current climate has shown low tolerance for cultural misappropriation, and our research found that the NAS imagery is offensive to those who are informed."

Epperson is a researcher with the Nicotine and Cannabis Policy Center, which is part of the Health Sciences Research Institute. More information about the center's research and resources is available online. 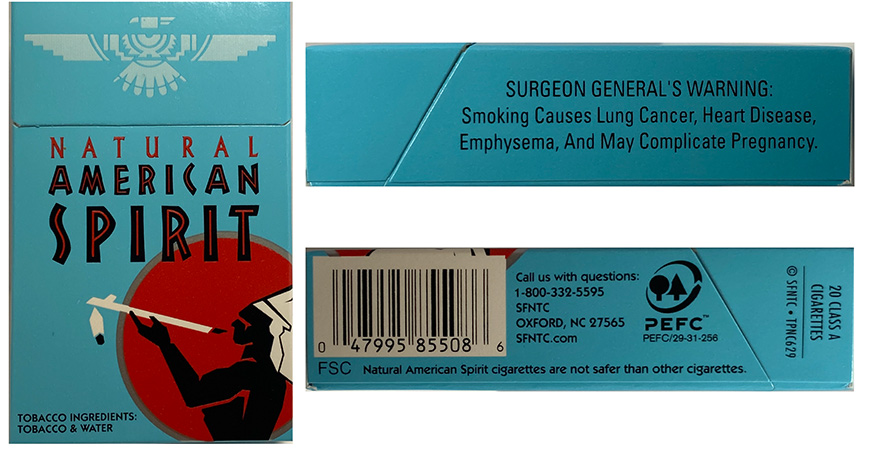 A pack of Natural American Spirit cigarettes is depicted. Photo by Anna Epperson.