Skip to content Skip to navigation
See our Campus Ready site for most up to date information about the fall semester.Campus ReadyCOVID Help
Public Health
School of Social Sciences, Humanities and Arts 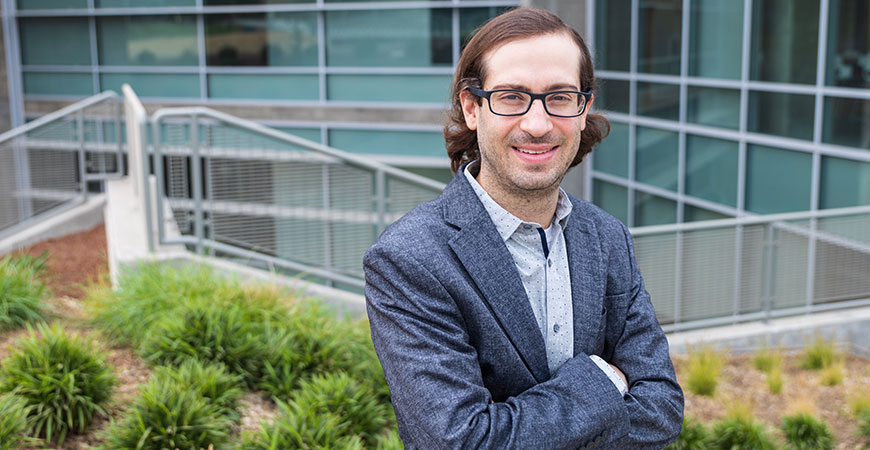 Professor Mike Thompson is applying his area of expertise to the COVID challenge.

Professor Michael Thompson doesn’t usually work in immunology or drug development. But his use of X-ray crystallography — research that visualizes the structures of protein molecules to better understand how they function — has taken him in a new direction.

Thompson joined the Department of Chemistry and Chemical Biology this summer after finishing a postdoctoral position at UC San Francisco. While there he helped advance new drug discovery technologies for SARS-CoV-2 at the start of the pandemic by working to visualize therapeutic molecules and provide structural information about them.

A large team of researchers at UCSF are testing a variety of possible drugs and drug-like molecules (from small molecules to antibodies) to see if they can be used as effective antivirals. In particular, one synthetic molecule shows promise as an inhalable form of PPE, the university said.

Many scientists are focused on the virus now because of the COVID-19 pandemic, and Thompson said that makes this a good time to approach the problem from different perspectives and apply new techniques, such as the ones he uses to reconstruct images of molecules using X-ray diffraction and math.

“If you want to target a virus with drugs, you need to know what the relevant molecules look like,” Thompson said.

Thompson, who grew up in the Los Angeles area, went to UC Berkeley for his bachelor’s and UCLA for his Ph.D. He said he is glad to be part of UC Merced, even though he joined at a time when nothing is normal. His lab will open on campus this winter, but for now he is doing his work in Professor Shahar Sukenik ’s lab at the Castle research facility.

Now that he’s at UC Merced, Thompson has decided to focus his lab, in part, around ideas he learned from his recent work on coronaviruses. Supported by the HIV Accessory and Regulatory Complexes (HARC) Center at UCSF, he’s interested in using new drug discovery strategies to make broad-spectrum antiviral therapies, by focusing on molecules that are traditionally overlooked as drug targets.

“Viruses have all kinds of ways to avoid the immune response, they make proteins that disarm their hosts’ immune systems” Thompson explained. “That’s why some viruses are so nasty — they are really waging war at the biochemical level.”

He said there is strong evidence that diverse viruses, including coronavirus, HIV, influenza and others, use similar mechanisms to suppress the human immune system. He hopes that with the correct approach, drugs can be found that are effective against multiple viruses, arming people in advance for the next pandemic.

“Everyone appreciates how important vaccines are, and I agree, but even very good vaccines aren’t perfect,” Thompson said. “They have issues with seasonality, limited efficacy, and sometimes limited availability. We need to find treatments to help the people who will still inevitably get sick despite our best public health measures.”