Skip to content Skip to navigation
Resources and Information on COVID-19 Ask a Question
UNIVERSITY OF CALIFORNIA, MERCED

Ryan Torres is a Ph.D. student in the Public Health graduate program at UC Merced. He presented his research at the Mosquito and Vector Control Association of California conference on January 27 in San Diego California. Among the attendees were the California Department of Public Health, the Center for Disease Control and Prevention (CDC), the Department of Pesticide Regulation, and numerous Mosquito and Vector Control Districts and Agencies. Ryan’s research is funded by a CDC training grant with his faculty advisor Dr. Andrea Joyce at UC Merced. His presentation ‘Wolbachia infections in mosquitoes of Merced County’ is a collaborative project with the Merced County Mosquito Abatement District. The work is being conducted for his Master’s project. 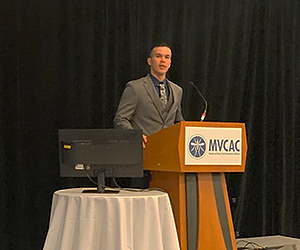 The invasive mosquito Aedes aegypti (aka the ‘Zika mosquito’) has been expanding its distribution in California and was found in Merced in 2017. A new pest control technique, Wolbachia-infected mosquitoes, or ‘Sterile Male Releases’ has been used nearby in Fresno to reduce mosquito populations. Wolbachia-infected mosquitoes are being used globally to reduce mosquito populations and to prevent vector-borne disease. Ryan’s project examines Wolbachia strains in mosquitoes in Merced County. This research provides data on whether or not each species is naturally infected with Wolbachia. This research is foundational for future mosquito control efforts.